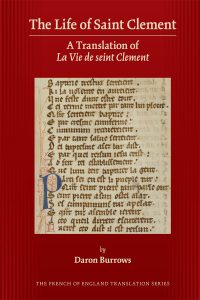 The thirteenth-century Life of St. Clement merges three widely disseminated early Christian Latin sources into a single translation/adaptation in the vernacular: Rufinus of Aquileia’s pseudo-Clementine Recognitions; Rufinus’ translation of Clement’s letter to St. James of Jerusalem; and the Passio Petri et Pauli. St. Clement is in part a dramatic biography in the form of a family romance (false accusations of incestuous adultery, flight, shipwreck, loss and reconstitution of the family) in which Clement’s quest is to disambiguate his biological father and his false and true apostolic fathers (Simon Magus and St. Peter). It is also a virtuoso debating poem, in which many topics are argued with zest and brio — permitted and impermissible knowledge, a narrative mappa mundi of various peoples in the world and their customs, free will and predestination, and much else, in the contest between Clement’s ideological inheritance of orthodox faith from St. Peter and the bad faith and necromantic tendencies of the Magus. This thirteenth-century reworking of a classic of early Christian thought extends the range of the already rich corpus of saints’ lives in the French of England and is made available here for the first time in modern English translation