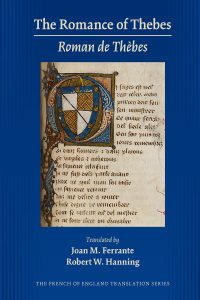 Ferrante and Hanning, two distinguished scholars who have long collaborated in translations and scholarship in comparative literature at Columbia University, are translating and introducing a major roman d’antiquité from the twelfth century for FRETS, the Romance of Thebes.  They are using for their base manuscript the late medieval text of the romance owned by the “fighting bishop,” Henry le Despenser of Norwich, notorious for the ruthlessness with which he dealt with Norwich’s share of the Peasants’ Revolt of 1381.